A man and his dog, Ace, were on a walk one day when something happened that he’ll never forget. The Pit Bull started pulling on his leash leading the man to an abandoned house. He didn’t know what was going on at first, but then he saw the unthinkable.

Ace was on a walk with his human when he started pulling toward an abandoned house. The man had no idea what to make of it.

Somehow, it’s like Ace knew there was a neglected puppy inside that needed to be saved. The pup lay there on the concrete in bad shape. 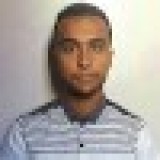